This year the league consists of 7 matches, 3 on Cawdor pond, 2 on Tansley pond and 2 on the canal. Only 1 match result can be dropped and it is 5 points for a section win so a good start is always a bonus. Cawdor pond had fished well all week, but typically the night before saw a heavy frost and it soon became clear that it was going to be a hard match.

Pre match talk mainly focussed on where people wanted to draw and as always Peg 20 was the one they all wanted.  Unfortunately for Mark wain he drew a Peg for Asa Cooper and that was Peg 20.

It was Malc Bent who won the match fishing from Peg 1, This Peg blows hot and cold but Malc produced a fine net of fish to weigh 15-5. Malc caught throughout the day, alternating between a Skimmer line and a Carp Line. Malc caught 3 Carp feeding meat and fishing Red Maggot over the top, he also had a nice net of silver fish.

Steve Allcock came second from Peg 24 on the little pond fishing a good match to win his section with ease. Steve weighed 10-15 with 1 carp and mixed net of silvers.

Asa Cooper took third place from Hot Peg 20, Asa only managed to snare one carp from the trees but backed it up with some silver fish, Mark Wain was not happy with Asa's efforts and would have done much better! 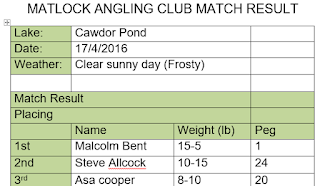 A difficult match with some poor weights, things can only get better. On a brighter note at least the sun was shinning.
Posted by Matlock Angling Club at 12:24 No comments: