After 6 matches its all still very close. There is only Andy Fox who can still get maximum points, all he needs to do now is win his next 3 match sections and he will be unbeatable. But there is still 5 anglers within 1 point of him making it very close. Weight may come into play if people are tied on the same points, so its vital to get big weights also.

Posted by Matlock Angling Club at 14:40 No comments:

Yet again Cawdor pond produced another good match with lots of fish caught and lost. It was Nigel Ellis who won the match drawing Peg 20, this is the best peg on the pond and the pressure is always on to win the match from it. Nigel didn't disappoint and won with a weight of 29 lb 13 oz. Nigel landed 9 carp and lost 10 to the bushes and snags. Nigel said he just couldn't give them enough bait and caught on several different baits including meat,sweetcorn,bread and pellet. In second place was Tony Carline who drew Peg 1 and landed 3 carp and a few skimmers, Tony also lost a few fish. Tony Caught his carp on the method feeder chucking into open water under the cliff face. In third place was Paul Ashley from Peg 19, always a difficult peg to fish when Peg 20 is bagging upn But Paul produced a nice net of Skimmers and Roach taken on mainly pellet.

Both Cawdor ponds are fishing well and responding to all methods, lots of carp being caught on the surface in the evenings.

Posted by Matlock Angling Club at 13:11 No comments:

On a cold but sunny day the fifth match in the league was fished on the Erewash Canal at Langley mill. Only 11 anglers fished the match with some anglers deciding to just drop the result. This was a little disappointing and unfair on those who did make the journey. It was thought that the canal would respond well to bread punch and it did for 30 minutes until the bites dried up. Mark Wain started well with 10 puts in producing 10 roach, Unfortunately that was it and Mark never had another bite. Asa Cooper caught a few roach on squatt and groundbait but struggled to keep the bites coming. In the end it was David Fowler who came out on top with a weight of  4lb 12oz, Dave caught the majority of his fish on chopped worm, including a decent sized Perch and lots of other sm.aller Perch. Second was Asa Cooper with a weight of 3lb who had a mixed bag mainly made up of roach and Perch. Coming in 3rd was Steve Allcock with a weight of 2lb 4oz with a mixed bag of roach,perch and gudgeon. Andy Fox also continued his good form to record another section win a with a weight of 15oz .


Posted by Matlock Angling Club at 05:56 No comments:

On a warm and sunny day Cawdor pond produced a close fought match with Skimmers being the main species caught. The little pond however didnt fish that well, it was only 2 late carp that fell to Jeff Snow fishing in the margins that won him the section . Much to Asa Coopers annoyance who had been winning the section for most of the match with 3 decent perch which fell to Lobworm. 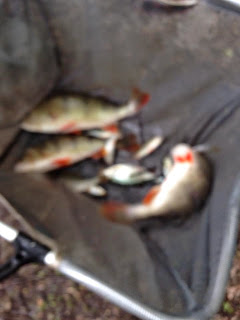 Taking top spot in this match was a joint affair with both David Fowler and Paul Ashley recording a weight of 15lb 6oz. Dave fishing from Hotpeg 20 was expected to win the match, but Dave just couldnt find the Carp but did manage to bag 2 and a good net of skimmers all taken on pellet. Paul Ashley joint first fishing from Peg 11 caught all skimmers and roach on a pellet approach. In second was Malcolm Bent fishing from Peg 1, Malc had 3 Carp and some Skimmers, but Malc lost 5 Carp which cost him dear in the end.  In 3rd was Mark Gegory with 9lb 5oz from Peg15, again this was mainly Skimmers taken on pellet. Match 5 will be fished on the canal at Langley mill. 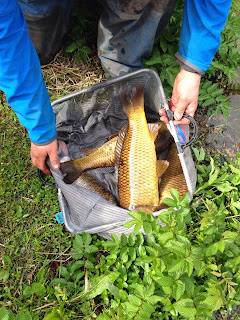 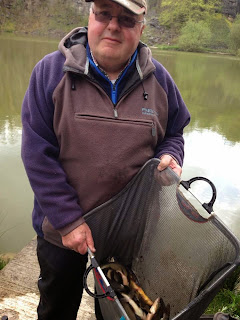 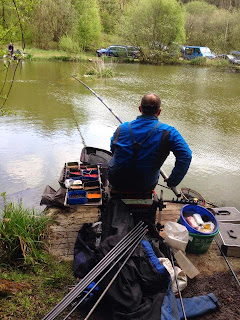 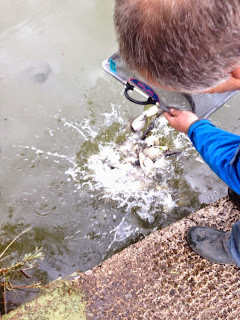 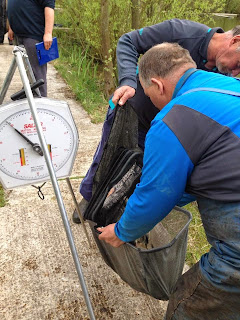 Posted by Matlock Angling Club at 12:38 No comments: 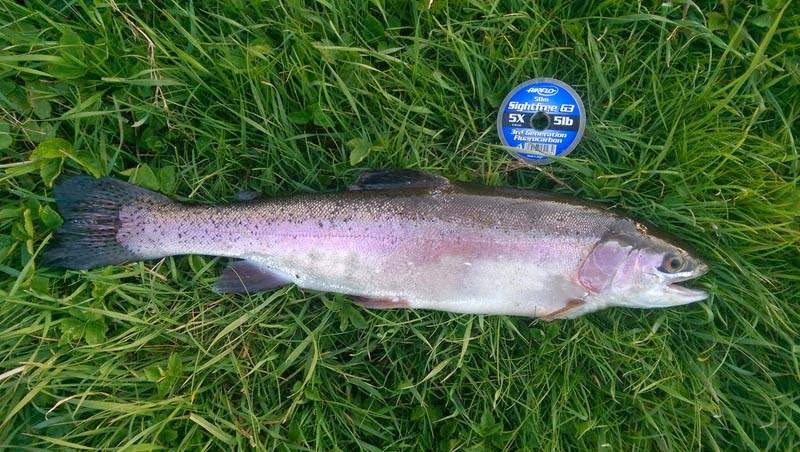 After discovering Matlock Angling club through the Facebook page and website, He liked what he saw and decided to join the club. Travelling from stockport for some fly fishing action Mr Griffith wasn't disappointed when he caught this fish at Darley Dale casting to a rising trout with a black size18 klinkhammer @22 inches and 3.5 lb it took some landing!
Posted by Matlock Angling Club at 12:33 3 comments: