Todays match was fished in nearly tropical conditions, the river was at a decent level and it wasn't raining. Things are looking up, the Chub also decided to come out to have a play.

12 anglers fished todays match and it was Russ Dowding who took top spot with a superb weight of 9-6 from Peg 59. Russ had 10 Grayling and a Chub weighing 4lb, it just shows that when the weather is right the Chub are there to be caught. Second place went to David Taylor on Peg 49 who weighed 7-10, Fishing a Stick float Dave landed 20 Grayling to take second place. Third place went to Malcolm Bent who weighed 6-4 from Peg 44, Malc had 16 Grayling mainly caught on the pole feeder. Fourth place went to Steve Allcock who landed 7 Grayling  from Peg 77, All Steves Grayling were of a good size..

Ken wood also landed a 3lb+ Chub from Peg 60. Lots of bites to be had again and nice to see some Chub being caught. 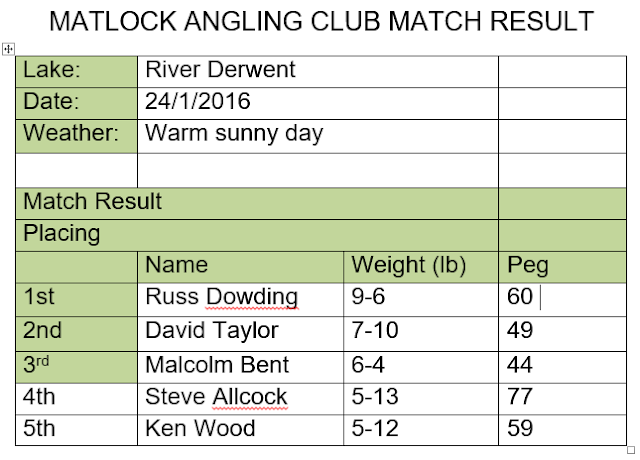 Posted by Matlock Angling Club at 08:47 No comments:

The river was not in flood for a change, although it was carrying a little extra water. But the match was scheduled to be fished at Matlock Bath which can handle extra water. But overnight snowfall saw a poor turnout and only 8 anglers braved the conditions.

David Clark continued his recent form to take top spot from Peg 25, Dave recorded a superb weight of 11-12, all Grayling caught on the pole feeder and bomb. In second place was Malcolm Bent who weighed 9-11 from Peg 37, Malc caught 16 Grayling and a Roach using the Pole feeder method and picking the odd fish up on the stick float. Third place went to David Fowler fishing from Peg 23, Dave recorded a weight of 8-10 with most fish falling to the pole feeder method again.

Lots of fish caught again on a cold winters day. Plenty of big Grayling showing and endless Trout to be caught. 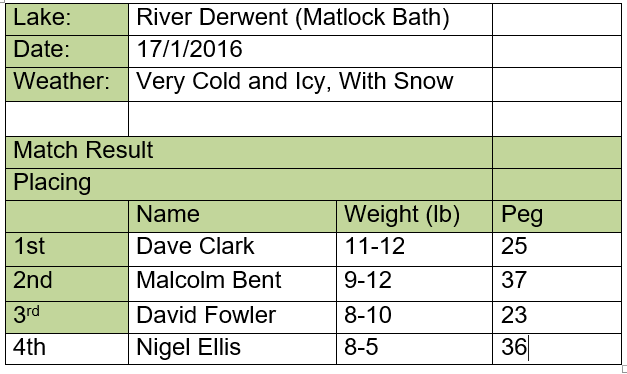 Posted by Matlock Angling Club at 06:40 No comments:

Once again over night rain made the river unfishable and yet again the match had to be fished on Tansley Pond. Only 8 Dedicated souls turned out for the first club match of the year to fish in heavy rain all day. Things can only improve weather wise and we should soon be back on the River Derwent.

With Tansley Pond fishing well the week before everyone wanted to draw down the chanel where once again the flooded brook was pushing a lot of colour into the water. It was Nigel Ellis who drew Peg 16 closest to the brook. Nigel was delighted with the draw and couldn't get to his peg quick enough. He wasn't disappointed and claimed top spot with a weight of 10-4 for a comfortable victory. Nigels weight consisted of mainly small roach,perch,skimmers and rudd taken on pinkie fished over groundbait.

The rest of the pond didn't fish  to well and bite were hard to come by. Second place went to K Masling who was also drawn down the chanel on Peg 11 producing a weight of 3-11. In third place was David Fowler who weighed 2-2 from Peg 2. 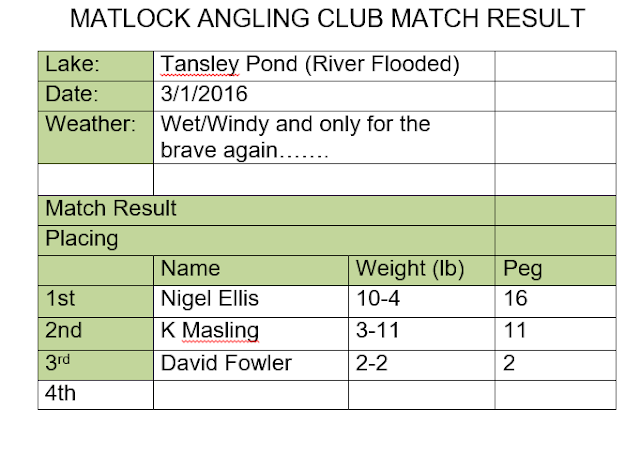 Posted by Matlock Angling Club at 13:33 No comments:

It soon became clear that you needed to be down that end of the pond and it was Steve Allcock who took the honours from Peg 13. Steve  produced a mixed bag, with a weight of 10-5, catching mainly roach,rudd,skimmers and perch to catch well through out the day. In a close second place was David Clark on Peg 14 next to Steve. David also caught well through out the day with another mixed bag of Roach,rudd,skimmers and perch. Third place went to Asa cooper who was not happy at the draw, Asa was disappointed to be at the wrong end of the pond, but he produced a superb net of mainly roach for 7-12. Asa was proud to tell me that he had caught 160 fish in total.

There were plenty of bites to be had on Tansley pond  with the right approach, the best approach on the day was to fish over groundbait with squat or pinkies, breadpunch will also produce a few bites if the pond is clear. 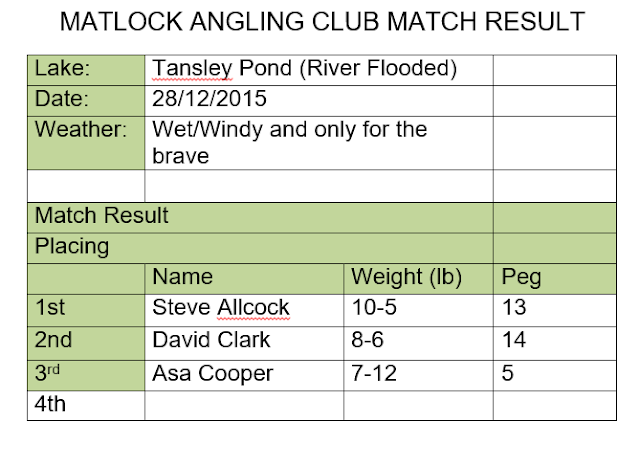 Posted by Matlock Angling Club at 13:04 No comments: