On the windiest day of the year it wasn't going to be a match for the fair weather anglers! But 12 brave souls turned up to do battle with the wind and the odd shower. With lots of over night rain the river was not fishable so Cawdor pond was fished instead.

Peg 20 was the Peg everyone wanted and it was David Fowler who had the honour. Unfortunately it didn't go according to plan for Dave who lost 3 Carp and broke his pole. Dave would have won at a canter, but like many who have drawn Peg 20 he was left cursing the trees!

It was Steve Allcock who took top spot with a fine net of Roach and Skimmers from Peg 3 weighing 8-13. With the wind being a problem, Steve fished relatively short at about 8 metres on pellet. Steve also had a few Perch close in under the trees on chopped worm. It was Dave Clark who was a close second with a weight of 8-8, Dave drew Peg 29 on the little pond, probably not the best draw but Dave fished a good match landing a dozen Skimmers and a few Roach taken pellet and worm. In 3rd place was Malcolm Bent, Malc drew Peg 5 and fished pellet to record a weight of 6-15 mainly made up of Skimmers and Roach. 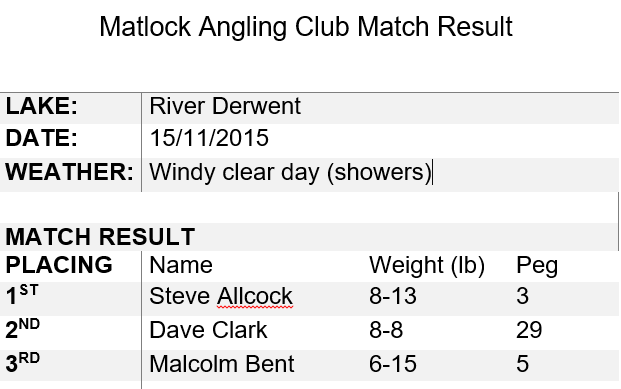 Posted by Matlock Angling Club at 14:37 No comments:

With a lot of rain fall during the week, big weights wasn't expected due to the colour of the water and the amount of leaves travelling through the river. But with small field of 10 anglers the river was in fine form, Out of the 10 anglers only 3 of them failed to weigh in over 5lb of Grayling. It was Malcolm Bent who secured top spot, drawing HOT peg 57 (The Boat house) always a good draw, but with any good Peg you need to know how to fish it. Malc didn't disappoint landing 20 Grayling for 10-9. Malcs main approach was the pole feeder picking the odd fish up on the stick float. In second place was John Barfoot from Peg 67 in the park. John landed 12 Grayling for a weight of 9-12 with some cracking 1lb+ Grayling. John travels from Mansfield for every club match and always does well. In 3rd place was Nigel Ellis with a weight of 8-3 from Peg 48 on artist corner,Nigel had 15 Grayling and again some of these were 1lb+. 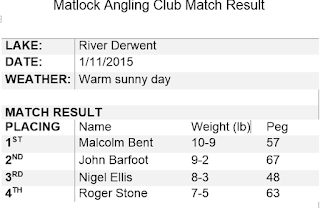 Posted by Matlock Angling Club at 15:33 No comments: