After last years promotion back to the top division there were some glum faces, if we had stayed in Division 2 we would have been fishing on the river trent, but instead after our great performance on the Leeds Liverpool canal we now faced the 300 mile round trip to the Gloucester Canal. 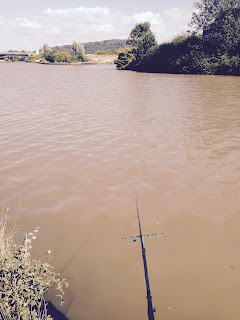 After a couple of visits to the canal it some became clear that we would be up against it, none of us had fished a canal of this size and depth. The majority of the team is more suited to smaller waters with depth of 3 to 8 feet. Instead we had depths of 20 feet down the middle and 8 feet a metre out. We caught fairly well in practice and established that we could catch Bleak on the whip feeding a cloudy ground bait and catching up in the water. we also caught well at 8 metres and also at 14 metre. lots of eels were caught in practice and some did well on the feeder for Bream. Team tactics on the day were to try and catch some Bleak early to avoid the dreaded blank, then maybe chuck the feeder for a Bream. We also fed a line with worm for the eels. Two ground bait lines were fed at 8 metres and 11 metre in the hope that they would produce some fish.

Little is known at the draw on if you have a good draw, because the draw is random and different peg numbers are used. I myself drew in B section, i had been told this was the section to avoid. I arrived in quick time at the canal with a little excitement, Theres always a buzz on these big matches. Drawing peg 42 i had a walk of about 15 pegs, looking up the canal to roughly where i would be i could see a massive turning bay, i was saying to myself please let me be in one of those pegs. Anyway that was a short lived dream as i walked 3 pegs past the turning bay. I was met by another angler with the delightful words of we are fishing for last in the section here and Will Raison had 7 oz of your peg last week. To cut a long story short i watched everybody to my left bag up in the turning bay on big Bream and i managed to catch 7 fish for a 180gram and a 5 point score.

Other anglers in the team didn't fair much better and it was mainly performances from Paul Ashley, David Thornley and Asa Cooper who kept us in the top division.

The team finished 38th out of 44 teams and missed relegation by 2 places. The good news is that we will be on the Trent next year and should be able to get in plenty of practice.

Big thanks to all those who fished the match and gave up there time and spent there hard earned money to represent the club at a nation wide event. If anyone is interested in fishing next year we are always glad to have them on board. We are all now looking forward to getting on the River TRENT NEXT YEAR.

Posted by Matlock Angling Club at 05:50 No comments: